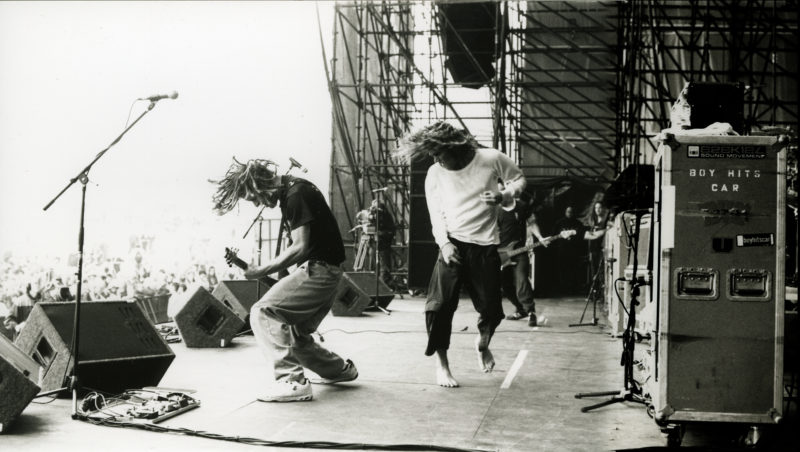 Me, (left, on guitar), and the boys, cutting loose during the pinnacle of our musical career, for about 20,000 frenzied music fans…

and still not fitting in.

This was the time of ‘Nu Metal’, the late ’90’s into the early 2000’s. A genre which included acts like Korn, Linkin Park, Limp Bizkit, Slipknot and more. We were the black sheep of the lot. Rather than the guttural growls of the day, we featured vocal stylings more like Perry Farrell or Geddy Lee. Throw in some odd, open guitar tuning and a 12 string acoustic guitar into the mix, we had this undeniable Eastern flavor which ended up sounding more like Ravi Shankar on crack.

This is Ravi Shankar, sitar legend. 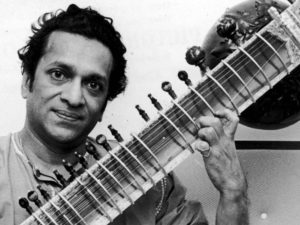 Anyway, this whole thing about not fitting in, not belonging is kind of important and it goes way back.

A notable incident was encoded into my DNA when I was about 6. I was exiled from my home…  told not to come back until I found the dog’s leash that I had lost – and for the life of me, could not find. Defeated and afraid, I laid my cheek on the cold sidewalk that lonely fall night in an attempt to sleep. Right about the same time, I began to hear coyotes howling in the distance…

My immature – yet impressionable, 6 year old brain took the best notes it could. Little did I understand, but at that moment,  my life’s purpose became:

Don’t Ever Let That Happen Again.

My formative years in Malibu were filled with surfing, skateboarding, soccer, skiing, tennis and girls. I would later add music, snowboarding, fitness, motorcycles, golf, cross-country obstacle course races and a lot of books.

Look good, do good, be good – very good at anything and everything, period. Make sure everyone likes me, at all costs. As physically fit, talented, creative and fairly attractive and smart as I was, whatever I accomplished was never quite enough to escape the impending doom, baseline survival mode fear that ruled my subconscious and compelled me for the next few decades.

I desperately wanted to belong somewhere, to be good enough to fit in somehow, but my heart burned loveless.

Mom tried to end her life when I was 10. At 16, I ran away from home, only to return and get kicked out again at 18. I spent the better part of the next 9 years sleeping at girlfriends’ places, on friends’ couches, in my cars, (6 in total),  and eventually on the street… again. Cheek on the cold sidewalk, some 20 years later.

I went to jail when my band was due to go on tour, almost died twice while drunk and high. Unplanned child at 25. At 27, when I found out my dad was not my biological one, the weed and liquor turned into cocaine and pills.

I existed in a dense fog of continual escape until I made such heavy going of it all, I could no longer fight.

I surrendered and began my journey into recovery and eventual freedom.

I was introduced to something unfamiliar – true friends.  People who would give without expectation of anything in return. Strange concept. They loved and accepted me just the way I was, although I was skeptical of their ‘real’ motives… as I still hadn’t seen my own value in the same way quite yet. That would take time – and a lot of work.

Meanwhile, the best years of my band and a new passion for healthy nutrition, superfoods and tonic herbs engulfed my life’s energy. My ability to be present and active as a father dramatically improved as well and my life began to have some meaning for the first time.

I also worked for a renowned Herbalist for the next 9 years. It was during that time that I became very interested in natural ways to rebalance the deficiencies that were my particular symptoms in early recovery: burnt adrenals, fried nervous system, poor sleep, over-burdened kidneys and liver, acute anxiety and bouts of depression.

Experiments in Alchemy ensued until I created an all natural, herbal longevity tonic that has been an integral adjunct to my growth and recovery. The formula is called Immortal and it’s made by my herbal supplement company, Sleeping Monk, that was founded in 2013. 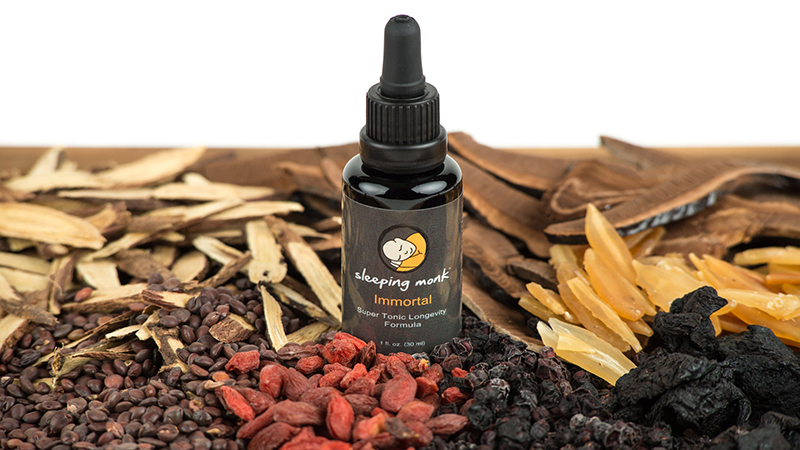 My life has continued to expand. I had the honor to write and play guitar for the score of a documentary on Kurt Cobain and I ran my first marathon at 47 years old, raising 11,000,000 gallons of clean water for those in need all over the world.

I have a new freedom and a new happiness that I get to keep as long as I continue to give it away by helping others. My response to life has completely transformed and for the first time, wherever I go and wherever I am… I belong.